Thursday brings a hint of seasons on the cusp and with it, lazy feet that would rather stay home, where I’m gradually rearranging things and taking more of my house back from the collection that was omnipresent in almost every room. I have to remind myself that even though I know it’s been a slow week if one considers the general aviation traffic, numbers of pilots I’ve encountered and spoken to, the chances of even another dollar bill parting from a visitor’s wallet or purse and into the donation jar — enlisting another ceremonial second lieutenant into Abe Lincoln’s Air Force would be even better — I MUST be present  . . . to be around when opportunity walks into the Museum, and to be there when opportunity stays home. I must because there are tasks that are waiting to be engaged at the airport Museum which do not require another nickel from a visitor, which require my attention WHY? Because this is my job, my responsibility to my creation which I’ve made with help from countless helpers over the years and four in the last three months. My responsibility to the museum isn’t based on how many fine people visit. There’s work to be done that doesn’t require another dime into the donation jar and not another helping hand getting the final 10 filing cabinets delivered. 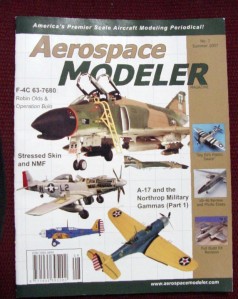 The first major accomplishment of the Museum following its arrival at the airport was obtaining and indexing ever issue of Aerospace Modeler a terrific magazine published in the USA by Billy Crisler in Colorado. The index will be cross-indexed by subject in the next week or so after I finish indexing the rest of the magazines I brought, with an initial large load of aviation magazines, to the airport office where I knew I’d have time and motivation for the work. Since finishing the Aerospace Modeler indexing I’ve completed about 90 recently donated issues of Airlines magazine and will likely complete all 18 remaining issues waiting there for me today. Then I’ll process almost as many Aircraft Illustrated magazine before beginning a meticulous cross-indexing of those and eventually integrating that info into the who data bank and website presence. This is work that must be done and to do it, I must be present at the airport office — where I would need to be anyway since for now I am the prime tour guide there. I need at least three other people with free time to volunteer to be tour guides as things start coming together so I can continue with the myriad tasks on the table out there and in the part of the AeroKnow collection that remains at my house. I’ll explain more about what’s home next week.
Speaking of good people, it was a treat to say hello to Kimberly Bush yesterday at the Museum. She is a former flight attendant, recently joined the Springfield Chapter Illinois Pilots Association, and became acquainted with this Museum during the visit to SPI by Commemorative Air Force Arizona Wing’s B-17 “Sentimental Journey” in June. Kim is back in Springfield these days, taking classes at Benedictine University and appears to be doing well. We had a fine visit, catching up, and I hope she will play a role in the future of AeroKnow Museum. I know she has the brains and looks for the work. I just hope she has the time. We shall see.
I could go on, but it’s close to 2:00, and I promised myself to be there by early afternoon. I aim to be as good as my word, so as Groucho Marx, great socialist comedian once said, “Hello I must be going.”

CAVU skies to you.