A Visit With Kirk Farah and a Microphone

In graduate school I interned as a cub reporter with Springfield radio station WMAY and listened to the station often over the years. Jim McKinny’s (probably mis-spelled) morning show at 9 AM weekdays was a fave of mine, and I thought the world of Jim. For four days, I was even a midnight DJ soon after the station moved from its home on west Jefferson (where I had reported news and enjoyed every minute in studio and reporting from the Illinois State Capitol newsroom)  out to a small town northeast of the city. THAT was not fun. I was to speak almost not a word except the station ident every 15 minutes, never play two songs in a row by female vocalists, and always return to music at the four-minute break in the top-of-the-hour national newscast — which I flubbed once, by starting the music at the 2 minute break. I was ashamed of my incompetence and I walked away without even a phone call to Rob Baxter the program director. I should have toughed it out. I might have a job today if I had. Understanding that background makes it easy to understand my pleasure interfacing with WMAY’s Jim Leach and Kirk Farah in recent years. Jim is program director/news director and is probably in charge of the coffee machine. He hosts an educational and entertaining morning show 6 am to 9 when Kirk carries the air until noon. I encountered Kirk this summer at the local airport, soon after I began setting up AeroKnow Museum, showed him the two cents’ worth of progress I had made at the time and said I hoped he’d visit again after I’d made at least a half a dollar’s progress. The moment came Tuesday when he sent me an e-note inviting me to the downtown studio about 9:30 to chat.

I arrived a little early so we could talk during commercial breaks and the 9:30 news about his plan.

This picture has been slightly retouched.

The first thing he said was, “Job, you will run the interview.” which is a great thing to say because it sounds slick and I knew what he meant, and that means he was already giving me some credit for slickness, a confidence booster on the launching pad.

The sign placed outside on the sidewalk when the downtown broadcasts take place, this picture has been slightly retouched.

There was tension before the news ended and the interview began. Before final words to news, Kirk mentioned that coming up next was a man who is passionate about what interests him in a way that few are and listeners would find him interesting. I knew Kirk was absolutely on top of what he was doing, but I also knew a few friends were tuning in and might tune out if my name wasn’t mentioned. Still, he is the pro.

Kirk Farah This picture has not been retouched.

The pictures here were taken before the interview began.

There was a short teaser into commercial after the news, and Kirk mentioned the aviation collection but still didn’t mention me by name. The tension in my “champing at the bit, eager to get out of the starting gate Kentucky Derby brain” was so palpable for less than 65 seconds that I could have broken off a piece, put some butter and marmalade on it, and munched on it while sipping a cup of coffee! But this was FUN.

The interview was a breeze, very focused. I understand there will be a pod cast posted of it, and I will update this post and my Facebook friends when it’s up so you can listen to it. Suffice to say that Kirk was focused on sharing the nuts and bolts of the situation at Abraham Lincoln Capital Airport where the museum is coming together, but he also mentioned I’m involved with local arts, and I’m a poet. My one regret in the interview concerns my going a MITE overboard with peripheral jabber and wasn’t as concise as I should have been. This will come as no surprise to most of my friends. 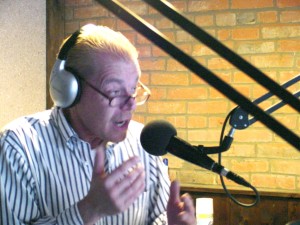 Since he had not visited the Museum since June, and I didn’t describe it to him in detail before we started, he suggested teachers might want to bring their classes to the collection. Unfortunately this is not a good idea, I explained, since the public area can accommodate no more than five visitors at a time. I’m not complaining about this; that’s just the way it is. But the meat and potatoes of the Museum did reach the public during the interview which concluded at the break for the 10:00 news.

“Can you come back on the show sometime?” he asked. 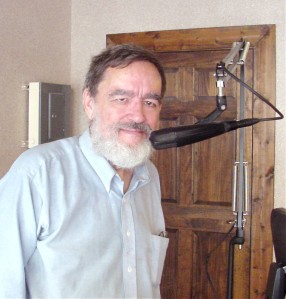 During the break, he graciously took my picture at the microphone. (Thanks again, Captain Kirk!)

The experience was total cool, and I look forward to a return engagement with the Kirk-meister and any other media inclined toward engagement.

He promised to visit the AeroKnow Museum to see how things are coming together, and I will gladly share the news here when he does.

Thanks to WMAY and Kirk Farah for the visit!