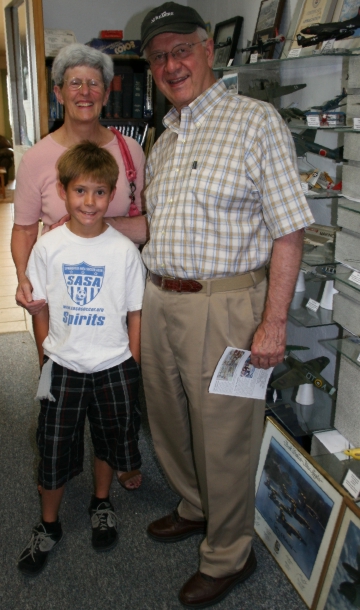 At about 4:30 Saturday, July 23, the people pictured here drove to the airport for one reason and one reason only: to visit AeroKnow Museum. They were not acquaintances from the poetry and visual acts communities.  They were not journalists or radio talk-show poisonalities. I had not met them before. They had not flown into the airport on an airliner, light plane, military transport or fighter, med-evac helicopter.and come in because they saw the sign on the entrance to the downstairs office inviting them in. They came because they had heard about this museum and wanted to see it.
–
Grandfather G. had called the FBO office — 523-5080 — to see if I was here, he was told I was, and out to the airport they came. Zach at the front desk near the front door stuck his head into my open office to be sure I was “here” and that the visitors could come in. By the time I made it into the lobby, Mr. G. was back at their car, telling his wife and grandson “the museum is open.” I waited in the lobby to welcome them.
–
A happy trio they were. Mr. G. explained he did not know how to reach me (I gave him a card) and we walked the few steps back to the museum office. I explained how the models were arranged, Brandon instantly recognized some. His other grandfather flew in the US Navy. I suggested that he should take up the excellent hobby of building plastic model airplanes, that his dad could get involved as well, and Mr. G. enthusiastically agreed.  As I showed his visiting g-p the rest of the contents of the office while Brandon and his g-mother looked at the models and the young man began dusting a few with his fingers! Here was a young man of ACTION, and I was delighted, even though the dusting didn’t long. Nobody wants to leave for home with dust-caked fingertips!.

Mr. G. also appreciated the photo collection which I predict will be as much of a draw to the museum as the models when we get the support needed to do what needs to be done here.

Unfortunately, thanks to my inviting them to see the rest of the museum, but pointing out there’s no air conditioning upstairs, and thanks to dinnertime approaching, Mr. G. declined. He did say they would visit again when the weather moderates.
–
As they started to leave, I asked if I could take a few pictures, they assented, and I snapped three fast ones.  I gave them the color souvenir story of AeroKnow Museum and finally I explained Abe Lincoln’s Air Force and the Certificate, suitable for framing. Mr. G. signed Brandon up on the spot. So I’ll be sending the custom-printed certificate to Brandon via First Class this coming week.
–
It was an enjoyable encounter of the best kind. They headed for the parking lot, promising to visit again soon.
–
I bet they will!
–
Sustain the vision. Build the dream.

I am a freelance aviation, business and tourism writer, poet, songwriter. My journalism appears regularly in Springfield Business Journal and Illinois Times. I am author of Springfield Aviation from Arcadia Publishing and available everywhere. As founder/director of AeroKnow Museum (AKM) and a volunteer with American Aviation Historical Society (AAHS), I created this blog to share news about AKM activity and aviation history.
View all posts by Job Conger →
This entry was posted in aviation, Uncategorized. Bookmark the permalink.