Visit With a Distinguished TexiCalifornian

Several years ago, I wrote a letter to the new editor of the American Aviation Historical Society’s Journal in which I cordially described my discontentment with the simple mistakes that I was encountering too frequently in their otherwise-excellent quarterly publication.  Most of the “hiccups” which came through LOUD AND CLEAR as I perused every issue were mis-identification of aircraft and pretty basic sub-nominal grammar, things that might pass in a chatty letter to an “English-as-a-second-language friend” in Krakow or Decatur, but really didn’t belong in a serious historical quarterly. I wasn’t angry in the letter, but I was clear in my hope that the editorial people would try harder. I posted the letter and promptly forgot I had written it.

Not long after, I received an e-mail from Journal Editor Hayden Hamilton who asked me to serve on the AAHS Editorial Committee who would proof-read every newsletter and journal before they went to the printer. For about five years, I’ve been doing just that. A few weeks ago, Hayden e’d me asking if I had plans for September 2, and I said my calendar was clean. He responded that he’d be in transit after a few days at the Antique Airplane Association Museum National Fly-in in Blakesburg, Iowa, and he would like to see AeroKnow Museum on his way home.

He did just that.

Hayden Hamilton, American Aviation Historical Society Publications Editor and Webmaster, pictured here in the Periodicals Room upstairs at AKM,  arrived close to 5 p Sunday, and promptly offered to download the pictures he had taken at Blakesburg onto the AKM office computer! WOW!

While the pictures were downloading, I showed him the office. Then we went upstairs to the Processing Room and then the Research Room.

Since he had a two-hour drive ahead of him, to reach his hotel in St. Louis and a flight back to home in California Monday, and since he had promised to buy us dinner, we did not have unlimited time to wander the six rooms upstairs. Even so, I was surprised how well and unhurried the visit went. Originally from Texas, Hayden was a stress analysis engineer for Cessna in Wichita in the early 70s. Since becoming involved with the American Aviation Historical Society whose home offices are in California, he and a very new assemblage of historians, including a dynamic new Association president, are working magic with their services and resources. There is what I call an “andiamo element” to what’s happening with the largely California leadership, assisted by talented contributors all over the USA. “Andiamo” in Italian means “Let’s GO,” and Hayden is a fine example. His visit has brought the same attitude to my outlook for AeroKnow Museum. 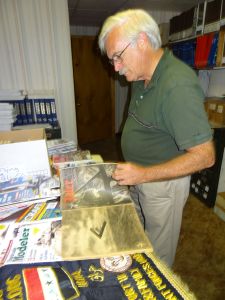 Before we departed the museum, he even donated every penny in his pocket to the “jug o’ pennies” displayed PROMINENTLY on a table by the door.

Dinner was at Hickory River Smokehouse on N. Stevenson Drive. The man taking orders was the manager and singer/guitarist John McDermott who recognized me before I recognized him. I hadn’t seen him since he was manager at the South Grand at Sixth Street Hardee’s before the store changed owners and went south in a handbasket. The food was excellent, and I was very impressed with the lie of the establishment — how it all came together. I intend to be a “regular” at Hickory River Smokehouse as circumstance permits.

I was returned to the airport parking lot by 8:20, said goodbye to Hayden and didn’t even return to the AKM; got into the truck and drove home. It was only when I arrived at the airport at 5:05 Monday morning and looked at the building from the parking lot that I realized I had left the Processing Room lights on all night! First thing I did after entering the building today was hasten upstairs and turn them OFF.

For the first time in a long time, I didn’t go without lunch while pulling another 13 hour shift here at AKM today. Thanks to a “doggie bag” of barbecued beef brisket and turkey taken home from the Smokehouse, not only did Hayden treat me to dinner; he also bought me lunch!

Soft winds and clear skies to all.

I am a freelance aviation, business and tourism writer, poet, songwriter. My journalism appears regularly in Springfield Business Journal and Illinois Times. I am author of Springfield Aviation from Arcadia Publishing and available everywhere. As founder/director of AeroKnow Museum (AKM) and a volunteer with American Aviation Historical Society (AAHS), I created this blog to share news about AKM activity and aviation history.
View all posts by Job Conger →
This entry was posted in aviation, Springfield, Uncategorized and tagged antique airplane association, aviation. Bookmark the permalink.

1 Response to Visit With a Distinguished TexiCalifornian