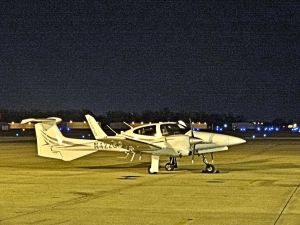 and listening to Bach on the computer when I looked up and saw visitor intently looking at the models. I waited a few seconds before saying “welcome” because she was obviously reading the little identification cards by them and taking it all in. When I did welcome her, she was surprised I was here. This is intentional strategy. The computer and bookshelf obscure me from view until a visitor is more than halfway into the room. We had a pleasant chat. She and her husband were en route to Minneapolis, Minnesota, but the weather was ugly north of Springfield, so they landed the family Bonanza at SPI. They’d continue in the morning. I walked with her out of the office, intended to view the Beechcraft from the warm lobby, maybe take a few pictures. She gestured to her husband reading a newspaper in the lobby and said, “Don, you have to see this museum over here.”

Don Newman was intrigued and appreciative of what he encountered. “Do you have a B-17 here?”  I pointed the B-17C to him, “flying formation” with a B-24D on the display case. He explained he had logged a thousand hours in 17Gs as an instructor pilot stateside during WWII. “We took all the armor out of them,” he recalled. “With all that weight gone, I could maintain level flight on one engine. We used to shut them down, one at a time moving from left to right. The number 4 engine was the most efficient. We always did this close to the base in case that one quit. I loved that airplane.” He spent many hours in the jump seat behind the pilot and copilot as an instructor. I told him that’s where I rode during my most recent flight in a 17, the EAA’s “Aluminum Overcast” last summer, and I showed him pictures I had taken when aboard the CAF’s “Texas Raiders,” my most unforgettable flight. Don was impressed with the pictures and happy to pose with the B-17C model. 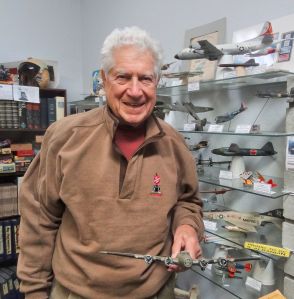 He explained he and his wife would be leaving reasonably early Thanksgiving morning, and I promised to be here to take some pictures before they departed. But first another picture . . . 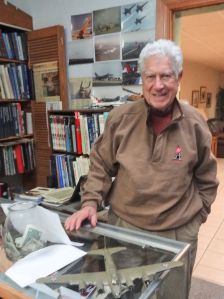 His wife explained there aren’t many octogenarians still flying around the country in their own Bonanzas. She said Don is 90 years old.
This morning, I was in my office when Don came in with outstretched hand to shake and tell me what a fine time they had in Springfield. When the line crew brought their airplane out of Hangar 1, we went out for a few pictures. I INSISTED that this time his “girlfriend” should be included. (She was his WIFE, of course.) 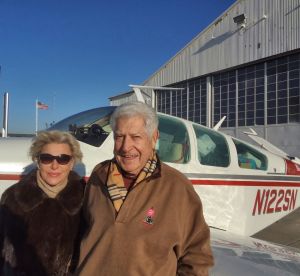 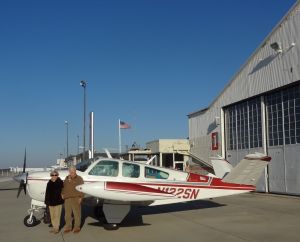 Before they boarded, Don explained the registration number “N122SN” is her birthday, January 22 (“She wouldn’t let me include the year,” he quipped,) and SN stands for Susan Newman.” In a few hours they would be having Thanksgiving dinner with their kids in Minneapolis. He gave me his email address, and I promised to send him pictures. I’m also sending a link to this blog. As they boarded, I took a few more pictures and bade them goodbye with a wave of the hand. 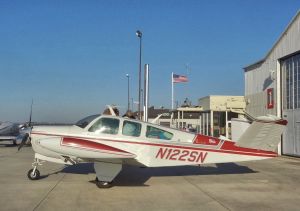 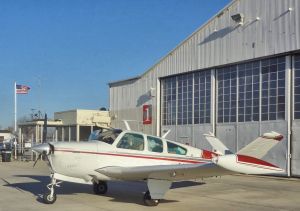 They took off on Runway 22. The Bonanza was too small for a decent pic at that distance. 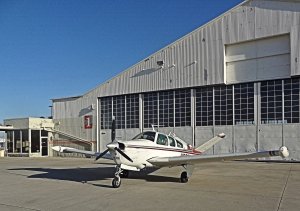 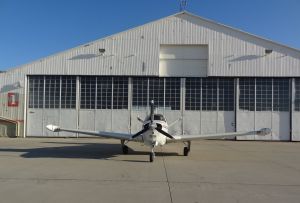 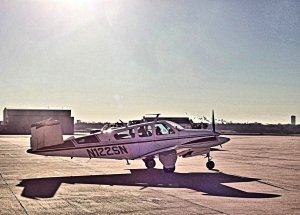 It was a pleasure meeting a special couple at my favorite airport. They are the “icing on the cake” of activity I’m engaging today. If you’re observing this great American day of gratitude and reverence, that you are as blessed as I.  And if Thanksgiving is not observed in your time zone, I hope your day is warm and rewarding as well.

Thanks for reading my blog.