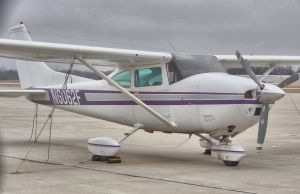 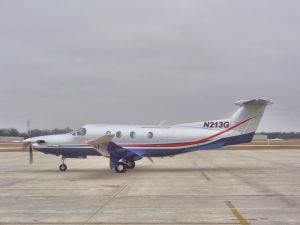 Met some nice people who visited the office, worked on IPA and AHEC things, went home at 4:30.

Mon, Dec 30 — After napping until 1:00 from an early party last night, slept hardly a wink before arising and arriving AKM at 7:40. Very cold — 5 degrees and still and sunny outside. Dull time here. Work was better. Finished indexing a box of AWSTs and brought them back to AKM. Left work at 5 and had no trouble with traffic. Was tired and numb at AKM office so departed for home at 6:15. 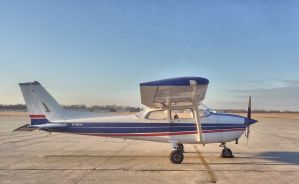 Photo’d a nice 172 w small registration. RF at HorAv explained the small regist indicates the airplane has not been painted since 1978.. Posted 3 pics at Fb. Work went VERY WELL because I had time to index all the 1997 AWSTs. George & I got along and I was glad to work until 5 because I need the dollars. Decided not to grocery shop tonight, to eat what I have in the house. The last trace of the sunset as I drove west was excellent; no trouble with oncoming cars. Did nothing major at the office and departed at 6:40 directly for home after time on Fb.

Thu, Jan 2 — Snow at night prevented me from going to work and to AKM.

Fri, Jan 3 — Sunny, calm and very cold (minus 5 degrees) coming into the airport. Arrived AKM at 9:10 since George didn’t need me at work until 10. Work was busier than over holidays, but that was okay. I still indexed a half year of AWSTs. Ate peanut butter for the first time since December 23, 2013. Ate the last of the jar. Felt like I’ve fallen back into the quagmire of woe and incapacity, but I’ll get over it. The roads scared me driving back to AKM. I KNEW any of the apparently wet spots on the highway could be ice, and I drove probably 45 mph tops. In the shadows, thanks to the salt residue everywhere, I could barely tell where the white lane lines were. Made it into AKM with no SIGNIFICANT GRIEF, thank GOD! Had a brief visit with a King Air 350 pilot, but it was too dark and too cold for pictures. Lurched around Fb, but it was all the same old same old. Gathered some newspaper pages to transcribe articles from at home. I dnn’t expect to be here at all Sunday because of forecast snow of up to 8 INCHES starting late Sat afternoon. I was cold and hungry and departed for home at 7:25.

Sun, Jan 5 —  Stayed home and worked on AKM material half the day.

Mon, Jan 6 —  Stayed home, worked on AKM material, moved a lot of pictures away from Fb pages to desktop files to email to airport computer.

Tue, Jan 7 —  To airport about 9 and worked upstairs getting ready for model club meet, and then to employer about 1. Back to airport, but not for long about 5:20, worked upstairs awhile.

Wed, Jan 8 —  Into AKM about 8:10, to work at 9 and back for the Central Illinois Plastic Modelers club meet that went very well. Departed for dinner and home at 9:40.

Thu, Jan 9 —  In at AKM 7:35 and processed pictures from club meet. Left for work about 9:10 and spent most of the day culling AKM-type articles from a stack of Aviation Consumer magazines. Made good progress. These had been slightly damaged from a water leak last fall in the Periodicals Room closet. The culling of the important articles is the best way to make the most of these resources. Back to AKM at 4:35 after leaving work in daylight. Worked on e-mail, posted pictures of model club at HyperScalers and CIPM pages. Had a nice visit with Kevin Fowler. Departed for home at 8:30.

Fri, Jan 10 — In at 8:25 after depositing at bank. Temp about 32 and WET streets, rainy overcast. HOORAY! The streets are okay. Phot’d the Brandt Cessna Citation before leaving for work. Had a VERY productive day culling articles from Aviation Consumer. Stayed until 5:30 for a customer who said he’d come late but did not. It was raining moderately heavily when I left and the headlights and street lights in the rain gave my eyes a FIT. Limped into AKM and processed pictures. Departed for home at 6:50 exhausted!

Sat, Jan 11 — Napped after decent dinner at 7:30 and awakened at 11:00; could not return to sleep, and beat myself up remembering the old days here at the airport when I was a kid, and wondering why I didn’t take more pictures and keep them. VERY DEPRESSING. Finally back to sleep about 2 and up about 7 for a cup of coffee to start the day. Transcribed the JTW Aviation column for April 14, 1940, a short production. Arrived AKM, probably 35 outside, threatening more rain, light wind, nothing on the ramp. WISH I had more time here! Work was fine. Examined a large pile of Antique Airplane Association publications that had been damaged in a closet where there had been a water leak and set aside a few to be culled for articles usable in the files. Back to AKM about 2:20, found Brian had brought copies of IPA/SPI newsletter; took several over to Springfield Airport Authority and the display in the terminal. Proofread another article for the next AAHS Journal. for the first time since starting AKM here, I closed the door, turned off the light and napped about an hour. Helped a lot, but decided to head home early via grocer. Departed at 4:50. Will try to get here before daylight tomorrow.

Sun, Jan 12 —  Was up at 3:55 at home and transcribed TWO JTW Aviation columns before breakfast of toast and arrived AKM on cold clear calm at 7:50. Proofread AAHS article and sent thoughts in by 9. VERY PRODUCTIVE DAY. Scanned 40 slide of ac to CD and posted a few.  Filed clips and sorted clips for HOURS in Research and Intake Rooms. Departed for home at 4:30 via grocer.

Mon, Jan 13 — In at 8:30 after bank deposit and Insurance payment.  Brought down some water damaged Antique Airplane Assoc. publications to cull for articles. Had a good day at work, culled articles from MANY AntAirAssoc magazines, got along with George who was gone most of the day. Back for the AHEC meeting at 5:20, lots of light, no trouble with the eyes. The AHEC Advisory Committee meeting at 6;30 was a drag and an embarrassment for reasons that were likely obvious to everyone but the prime perpetrator. I took notes though, to the end about 8:10 and showed the AKM office to the guests at the AAC meet. Went home furious. Stayed that way through a nice late dinner and snoozed off in the recliner rocker about 10:30. Slept okay.

Tue, Jan 14 — In at 7:35 in high wind and clearing skies. Brought down more AAA mags to process at work. The weather worsened in mid-morn, but it was fine by 5. Accomplished a LOT re AKM and even more when I returned to AKM. Lots of correspondence, posted some pics at Fb. Departed for home and late dinner at 9:05.

Wed, Jan 15 —  Departed home later than expected and bought fuel at Air Jiffy; into AKM at 7:40. VERY COLD out and windy! Hurtin’ cold. Posted a few pics on Fb and went to a busy day at work. Still, culled articles from so 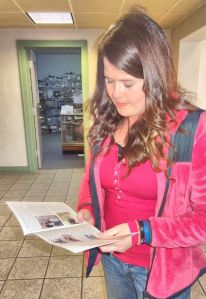 me AAA magazines. Left at 3:45 to return to AKM and take some pictures of Noah Sisson who won the IPA scholarship this year. Showed him the collection briefly and sang a verse of “Mariah” to his sister Mariah. 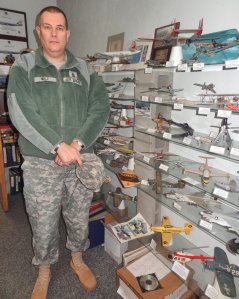 As I started to process their pictures, a visitor came into the office: J. Wall with the IL Army NG. He heard about AKM on Gerald Voight’s Scale Modeling Hour radio show! Had an excellent visit through the whole AKM and finished about 5:45. I semi-rushed to the IPA meeting at the Luxemborg restaurant and had an excellent time there. Seafood sampler was sub-nominal; next time I’ll have a small steak. When George Murphy heard me complaining about no money for new printer ink cartridges at AKM, he paid for my dinner! Nice guy! Thought about stopping for wine at CVS on the way home, but did not. I’m glad I didn’t. Things are going okay; I don’t really need it. Easy to bed.

Thu, Jan 16 —  To The Cuttery for an excellent hair cut and beard trim for $25 including a $3 tip to Kaitlin, my “barber” for the second time, did a nice job, and I hadn’t tipped her the first visit around Thanksgiving time– I had the cash so what the hell? I was glad to be ABLE to tip her. To bank and straightened out my tangled bank account — long time coming, but it’s back in order with almost no dollars but I’ll eat. Arrived at work at 11 and had a fine day culling articles from AAA mags mostly. Processed several slide scans and posted a few to Fb.  Departed for grocer and home at 7:55.

Fri, Jan 17 —  In at 7:35, Very cold, sunny and moderate wind. Processed pics. Brought down some more Aviation Consumer mags to cull articles from at work. Had a decent day at employer and did major culling from the last of the Antique Airplane Association mags and well into the AvCons I brought in. Back to AKM in painful cold, to a desolate airport. Began to catch up with digital images not processed since last November. The photo work is really building up here. Arranged several earlier days of prints and  cleaned up the desktop. Created a new file for scans of MY (and AKM slides/prints. VERY TIRED. Departed here at 7:30. 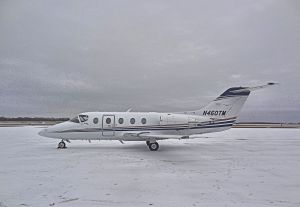 Photo’d a Hawker BeechJet and flight crew, good meeting with Gregg Benshoof and posted a pic at Fb . 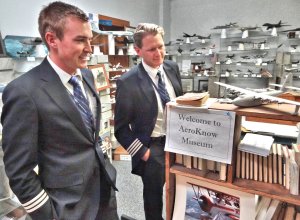 As I
departed, I encountered Jim W and his son Alex coming into the lobby to visit, and I was happy to show them the office. 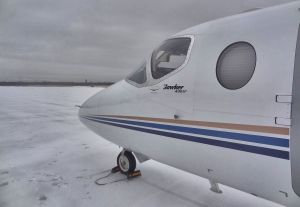 I apologized for not having time to show them the rest because I needed to visit Shop and Save and be home before the evening became post-sunset. Jim brought some terrific books and kit additions, but I had time only to take them out of the bags to see what they were. My priority was showing Alex the office since Jim had seen it earlier this week. Explained that I would love to show the rest anytime Sunday, especially if they would e me or Fb message me, in advance, their interest in coming out. I almost followed them out the lobby door, had an easy drive to grocer despite the light snow that had fallen (roads were fine) and walked in the front door at home a little before 6. All in all it was a terrific day!