Did nothing all day but process pictures taken Saturday, and when I stopped at 8:30, I still wasn’t finished. I had an excellent time and didn’t even miss lunch. Went home at 8:50, satisfied with my day’s effort.

Mon, Mar 24, — Deposited a partial rent check and paid utility bill downtown. No time left to visit AKM until after work. Did a lot of copying and had Parkway Printers print more AKM basic brochures, color brochures and business cards. I paid with a personal check. AKM will pay me back when support permits. Had some visitors while I processed more pictures from Saturday, including a C-21 pilot from Scott AFB — nice fellow, upper admin, said he flies a desk mostly now, but he was getting current with night landings later at home base — and two quiet, mute, surveyors of the shelves. Worked on pictures until 9:10 and went home by way of Shop & Save.

Tue, Mar 25 — Light snow and ice on windshield and lawn and blue sky. In at 8:30 after depositing a paycheck. Took a few pictures of a G150 and medevac Eurocopter.

Tidied the office a little. Much too little time here before going to work! Employer was fine. FINISHED copying all the pages from Sport Aviation and other magazine articles. MAJOR PROGRESS, that. Continued to process pictures from Saturday. Posted a few of a variety of ac phot’d that day at my Springfield Skyways blog. Went home happy with the day at 8:00.

Wed, Mar 26 — In at 7:30. Sunny, cool. Model club day! Caught up with some correspondence. Work went okay. Worked on updating my check records; made some progress but not much with the interruptions. At employer, I designed and printed several pages of a new AeroKnow Museum Volunteer Time/Task log. I’m an OPTIMIST. I believe I will begin having a reason to use the log this season . . . or summer . . . or year.  The model club met, but I didn’t attend with a model; later took penny whistle and recited a Lindsay poem.

Thu, Mar 27 — Hard time getting started, cool threatening more rain after early rain and blustery, in at 7:55 and phot’d a PC-12 about to depart. 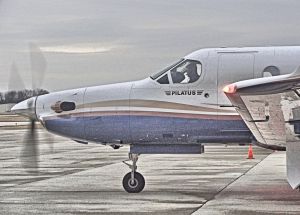 I was depressed and miserable most of the day at work. Nothing George’s fault; just uncertainty over computer security in my office. Put together a lot of culled articles with copied and original pages. PROGRESS. Very slow re customers. MUST produce IPA/SPI newsletter tonight dang it. I have so much to do with the museum I DO NOT HAVE TIME FOR THIS. Have hinted to chapter president I want to stop doing the newsletter after June this year. Had an excellent visit with Daryl Ponder who picked up some Reisch Brewery pictures he had loaned me years ago and toured the museum up and down. Worked until 9:30 producing the IPA/SPI newsletter and went home via Shop N Save.

Fri, Mar 28 — In at 8:30, cool, calm and overcast. Taped a holder for b&w AKM brochures to my office door. Had intended to go to the library downtown to research for John Thornton Walker book, but what I anticipated would take 1/2 an hour — making corrections in the IPA Springfield Chapter newsletter I produce — took more than an hour of correspondence and growing frustration with the chapter president who proofreads my writing. Most of the hassle was due to my rushing the process and not taking my time. By the time the newsletter was okay I had less than 45 minutes to get to the library and then to employer by the promised 11:30. So I worked on AKM photos during the time I had remaining until time to leave for work. Employer time was very productive for AKM. I FINISHED putting the copied pages into the culled articles. MAJOR ACCOMPLISHMENT! Back to AKM published The Week that Was — March 16 –22. I was late with that, but I had to get it done! Departed for home at 7:05.

Sat, Mar 29 — Overcast and chilly but calm. In at 8:55. HARD NIGHT last night. Could not get to sleep, lay awake with Corelli, Mozart’s 35th Symphony, Gershwin’s American in Paris and much more on WILL 90.9 FM radio, drank wine from a bedside gallon jug to get to sleep and it did not help. My mind was like a house might feel sitting next to a railroad track with a long, high-speed freight train clattering by: memories, ideas, regrets, resolutions in major motion. Finally went to sleep listening to classic rock on 93.5 and up at 8:30, not in pain, but feeling the aftermath with a dizzy head. I will be okay. I do not want to go to employer, but I will because I need the money and will be paid . . . . . . . . . . . . . . . . . . some day. Work was the old cold hell it was before I became better adjusted to the owner (because of all I accomplished for AKM while I was there.) He continues to treat me like a boy who picked his cotton before the Civil War, and when he does that, I behave . . . in turn . . . like a boy who picked his cotton before the Civil War. Chuck, the owner of Parkway Printers in the half of the building across a wall from my employer had placed signs in the window “SHOP FOR SALE” which hit me hard too. It means he can’t stand to be in the same building as his brother-in-law. I asked owner if he’d seen the signs Chuck had put in his windows and he said “no,” stormed through the open doorway and ripped the signs down. THAT was depressing! I’m really, honestly concerned for Chuck. He’s a decent fellow. When I departed today, I took my guitar and all personal papers all the aviation magazines and clippings I had worked on there (because I am done with what needs to be done with them) and left a small stack of magazines in a drawer, magazines I need to index before I bring them back. At 2:40 I’m tired and still getting over the wine from last night. . . Lay down on the carpeted floor of the heated, warm Process Room to try to nap away some fatigue and depression. Rolled up my windbreaker for a pillow, covered eyes with another windbreaker, lay flat on my back and slept maybe 10 of the 40 minutes I was prone. It helped enough for me to spend half an hour filing Cessna articles in the Research Room. THAT was progress. Home via grocer at 6:45. NO WINE will be consumed tonight. That is for certain. . . . . .