Saturday, April 2 — Slept late after a rocky night. Was delayed in transit to airport by participants in the annual Lincoln Half-Marathon race and arrived AKM mad as hell with the delay and driving the  long  way after waiting at least 15 minutes thinking the participants were almost all by and they’d open the street. Silly me.  Just time to grab a few things to take to work on at employer from 9 to 2. Did a lot of copying.  Productive work. Then to Harold Q’s house to pick up some donated magazines which weighed a TON. To AKM about 3:45 and unloaded into office to process them here. First processed pictures and blog from Friday and shared at Fb. Processed magazines until 7:45 and went home after another incredibly busy and productive day. I MUST get  more hours in here at AKM!  SO MUCH  TO DO!  Day rating:  A

Pictures were taken during promotional filming for Springfield Air Rendezvous 2002 on the north quadrant of Capital Airport between the Safety Building and Garrett, the major business jet maintenance facility. The clipped-wing T-6 was owned and flown by Bill Leff, a Learjet pilot for State Farm Insurance, based in Bloomington, Illinois. The clipped wings were Bill’s idea to give it a faster roll rate in the air. We had met earlier at an Air National Guard open house when he showed me the airplane close up; said it was the best equipped ‘6 in the world, and I’m sure it  was.  He later moved to Ohio. Air show manager Kim Curry invited me to be on hand for the occasion so I could photograph the activity and some other interesting flying machines in the periphery of it all. ‘Twas a most memorable morning! 🙂 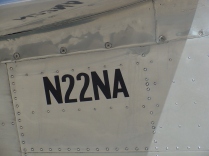 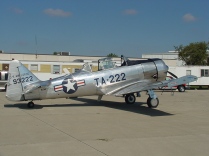 I am a freelance aviation, business and tourism writer, poet, songwriter. My journalism appears regularly in Springfield Business Journal and Illinois Times. I am author of Springfield Aviation from Arcadia Publishing and available everywhere. As founder/director of AeroKnow Museum (AKM) and a volunteer with American Aviation Historical Society (AAHS), I created this blog to share news about AKM activity and aviation history.
View all posts by Job Conger →
This entry was posted in T-6, Uncategorized. Bookmark the permalink.