My friend Chuck Midyett shared the news about two weeks ago that he would be flying Spooky Squadron’s  AC-47 (recreation of a C-47 manufactured in 1943) to Urbana, OHIO in the week ahead and it would likely stop in Springfield, Illinois en route. The appearance would happen if the airplane, which had been in the southwest since having an engine issue that prevented it from flying, could be repaired. About June 6 he announced the likely visit on Facebook. I thought Spooky would arrive SPI sometime Thursday, but I was delighted to see it “PROMINENTLY ruling the ramp” when I arrived at Abraham Lincoln Capital Airport about 6:30 Wednesday morning. Chuck and his co=pilot Keith had successfully repaired her flown a long day from her temporary residence to SPI the day before, arriving about 10 pm. In minutes I was taking pictures from behind the fence in early morning sun.

The first picture I took shows the shadows of the security fence,, a light pole on the left, and the photographer on the lower right. Later in the morning the sun had risen high enough into the sky what shadows are never problems 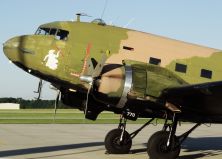 Note that pesky shadow across the nose from the light pole behind me. It all depends on where the plane is parked and time of the morning when the picture is taken.

The shadow across the nose from the light pole was removed when I edited it. 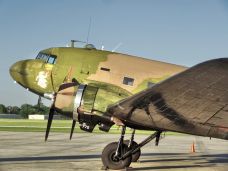 This picture is un-fiddled with. Note the shadow fron the light pole behind me still lay across the nose

This picture was “solarized” during editing.

Retouched for a different look with Corel photo software.

An hour later, the director of Lincoln Land Community College’s Aviation School came into my office with the happy news he had come to show his students the AC-47. I was happy to walk out to the plane with him, and since Chuck and Keith had not yet arrived, I gladly shared what I know of the airplane and answered a few questions. 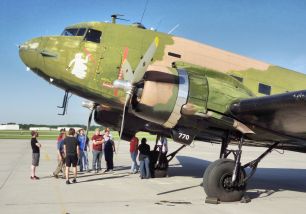 Then some of the students visited AeroKnow Museum’s Welcome Room where we talked about models and aviation history.  They then walked back to their hangar down the ramp, planning to visit again when Chuck and Keith arrived to  share their considerable expertise with them.

Perhaps an hour later, Chuck and Keith arrived and the students returned to ramp. Before heading out to Spooky, Chuck, who had come into my office to say “hello” also said words to the effect, “Job, we’re not going to spend the weekend with  the airplane. We’re going to deliver it, rent a car and drive back to Springfield. Would you like to come along?” You know I said “YES!” We headed out to the plane and students, and I took a few more pictures. Some visited the interior with Keith supervising and then the flight crew began pre-flighting the big bird.

While that was going on, I returned to my office to get ready. Since our model club would be meeting upstairs at AeroKnow, I let club members know I  would be absent, but the key to the room would be left with the line crew at Horizon Aviation. I had earlier set up my camera batteries to add as much “charge” as possible before departing.  I had no idea what would be waiting for  us at Grimes Field. Perhaps other aircraft would have arrived, perhaps not. I would be as prepared as possible and hope the batteries would be good for the duration. I decided since we would not be there for an air show, I would not need my big 300 mm lens for my digital Canon SLR. I would be able to handle telephoto work with my  small Sony Cyber-shot. I did pack extra memory cards for the cameras.  I decided to leave my cell phone in my office. With my luck, I’d likely lose it or leave it behind in Urbana.  I also put several AeroKnow Museum brochures and business cards into a small bag to share with  the local denizens at Grimes. Ever the “cub reporter,” I grabbed a blank sheet of paper for making notes in transit and after arrival. One thing I did not grab was a pen! As things happened in the hours to come, a pen wasn’t needed. I’ll explain in Part 2.

Part two of this story will describe the flight and arrival at Grimes Field, Urbana, OHIO. Stay tuned.

I am a freelance aviation, business and tourism writer, poet, songwriter. My journalism appears regularly in Springfield Business Journal and Illinois Times. I am author of Springfield Aviation from Arcadia Publishing and available everywhere. As founder/director of AeroKnow Museum (AKM) and a volunteer with American Aviation Historical Society (AAHS), I created this blog to share news about AKM activity and aviation history.
View all posts by Job Conger →
This entry was posted in AC-47 "Spooky" restoration, Uncategorized. Bookmark the permalink.