An Encounter With a Piaggio Avanti

When I visited car dealer Todd Green to interview him for an article I was writing for Springfield Business Journal, I saw a picture of a Piaggio Avanti twin turbo-prop pusher business aircraft on his desk. Naturally the first half an hour of our meeting, we talked about the Avanti and flying and THEN we talked about the cars business. Todd said that if I ever saw it on the ramp at Abraham Lincoln Capital Airport, to look for him and he’d be happy to show it to me.

Little did he know that our next encounter at the airport would coincide with my moving a glass display case into the new AeroKnow Museum and his arrival, with his fine family, for a flight in the Avanti for a flight to Texas. Despite his family and his flight crew checking in, Todd helped us unload the display case. If he hadn’t been there, it would have been a tougher go of things. Obvious was the reality that this was no time to look at the airplane, and 15 minutes later, everyone was ascending to thirty-something thousand feet pointed southwest.

Something compelled me to work late at the Museum a few Sundays ago, and the reason became clear when Jared Kurth walked in and invited me to go look at Todd’s amazing flying machine. Jared is a pilot with Byerly Aviation in Peoria, Illinois, and he flies several executive aircraft including turbo-prop twins from Aero Commander and the elegant Avanti. Todd was en route to the airport, but we had some time, and I could take in the interior too. I could take all the pictures I wanted. 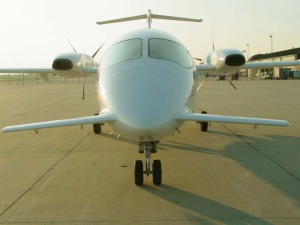 With its forward small wing stabilizer combined with the traditional horizontal stab atop the vertical stab and rudder, no other big bird comes Close to the Avanti in the looks department!

It was late in the day, and the fading light worked against us.

By happy coincidence, the airplane’s nose was pointed in the right direction: east so the western sun, low in the sky, could provide good light for the picture above.

view of the port engine air intake from a passenger seat

Todd’s Avanti is one of the first manufactured, but it is as clean as a whistle in and out, from stem to stern. 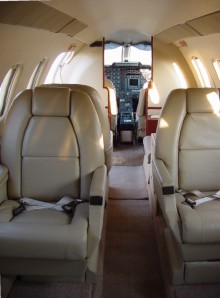 looking forward from the rear of the cabin 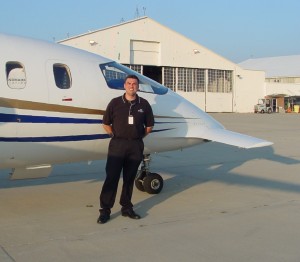 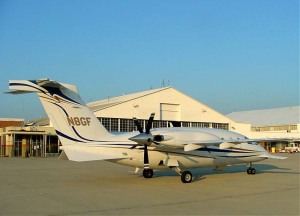 The effect of the sinking sun is evident here. This is the only airplane I've seen that has more curves than Sophia Loren, another sexy Italian masterwork!

I will post more pictures of this airplane at the AeroKnow Museum website in the days ahead.

Any pilot or aircraft owner reading these words is cordially invited to look for the AeroKnow Museum when you fly to KSPI and take fuel and refreshments at Landmark. If I am there I will gladly spend some camera time with you, share pictures and email YOU every one I take.

Thanks to Todd Green and Jared Kurth for courtesies extended.

CAVU skies to all!